As mentioned in the previous installment, Guernsey has three Asplenium hybrids, two of which currently only occur in Guernsey. There are a number of theories as to why the parent species only appear to hybridise in Guernsey.

One major factor is the unique hedgebank habitat which is managed on a strict cutting regime. Although this means plants can be short lived or severely damaged due to strimming, it does create sufficient disturbance for the formation of these hybrids. As well as habitat, Guernsey has an extremely favourable climate for these ferns. Few frosts combined with humidity from the Atlantic allows ferns to thrive here.

Identification of these Asplenium can be difficult however, especially when trying to differentiate Asplenium adiantum-nigrum, Asplenium obovatum subsp. lanceolatum and their hybrid, Asplenium x sarniense.

Asplenium scolopendrium and its two hybrids are rather more easy to identify and so I will cover these in less depth.

These two species can appear similar at first, this is made more challenging by A. adiantum-nigrum's infuriating variability. Differentiating the two is a relatively simple task however as there are some consistent characteristics and once familiar with these it becomes easier to identify the hybrids.

Frond: The first and often most noticeable difference is the shape of the frond. A. obovatum has a lanceolate frond whereas the frond of A. adiantum nigrum is much more triangular. A. obovatum also tends to be less glossy and has a more delicate appearance than A. adiantum-nigrum.

The flushing fronds are very distinct. In A. adiantum-nigrum the pinnae are very upswept, in contrast, the pinnae of A. obovatum are tightly curled under at the margins.

Pinnae: Both Species have pinnae that are divided into distinct pinnules. In A. obovatum these have pronounced 'wave' shaped mucronate teeth which give the whole frond a spiky look. A. adiantum-nigrum is variable in how pronounced the teeth are but they are generally more triangular and are never mucronate.

Sori: This is a very helpful feature in telling the two species apart. A. obovatum has sori arranged around the margin of the pinnule whereas A. adiantum-nigrum has them arranged up the centre of the pinnule.

So this should help distinguish A. obovatum and A. adiantum-nigrum, but what about their tricky hybrid, Asplenium x sarniense?

Simply being told it is intermediate is not helpful when A. adiantum-nigrum is so variable, very often what is a suspected hybrid turns out to be an unusual parent species. Being told to observe sterile spore is also as good as useless in the field unless you want to test every unusual looking Asplenium in the hedgebank!
The aim of this following information is to give the most consistent features of the hybrids to try and narrow down the number of possible hybrids when in the field. The only way to truly confirm the find however, is to look for sterile spore under the microscope (more on that later).

Frond: The frond of the hybrid is generally triangular as in A. adiantum-nigrum. It is not as glossy as the average A. adiantum-nigrum frond. The flushing fronds are very useful if present, they are intermediate, the pinnae being upswept but also loosely curled under at the margins.

Pinnules: One of the most noticable features of the hybrid is the mucronate teeth to the pinnules.

Sori: The sori are arranged up the centre of the pinnule as in A. adiantum-nigrum.

Overall the hybrid ends up looking much like an A. adiantum-nigrum however it always seems to have a very spiky appearance due to the mucronate teeth. This tends to make it stand out so other features can then be observed. The following set of pictures are all fairly typical examples of this hybrid. 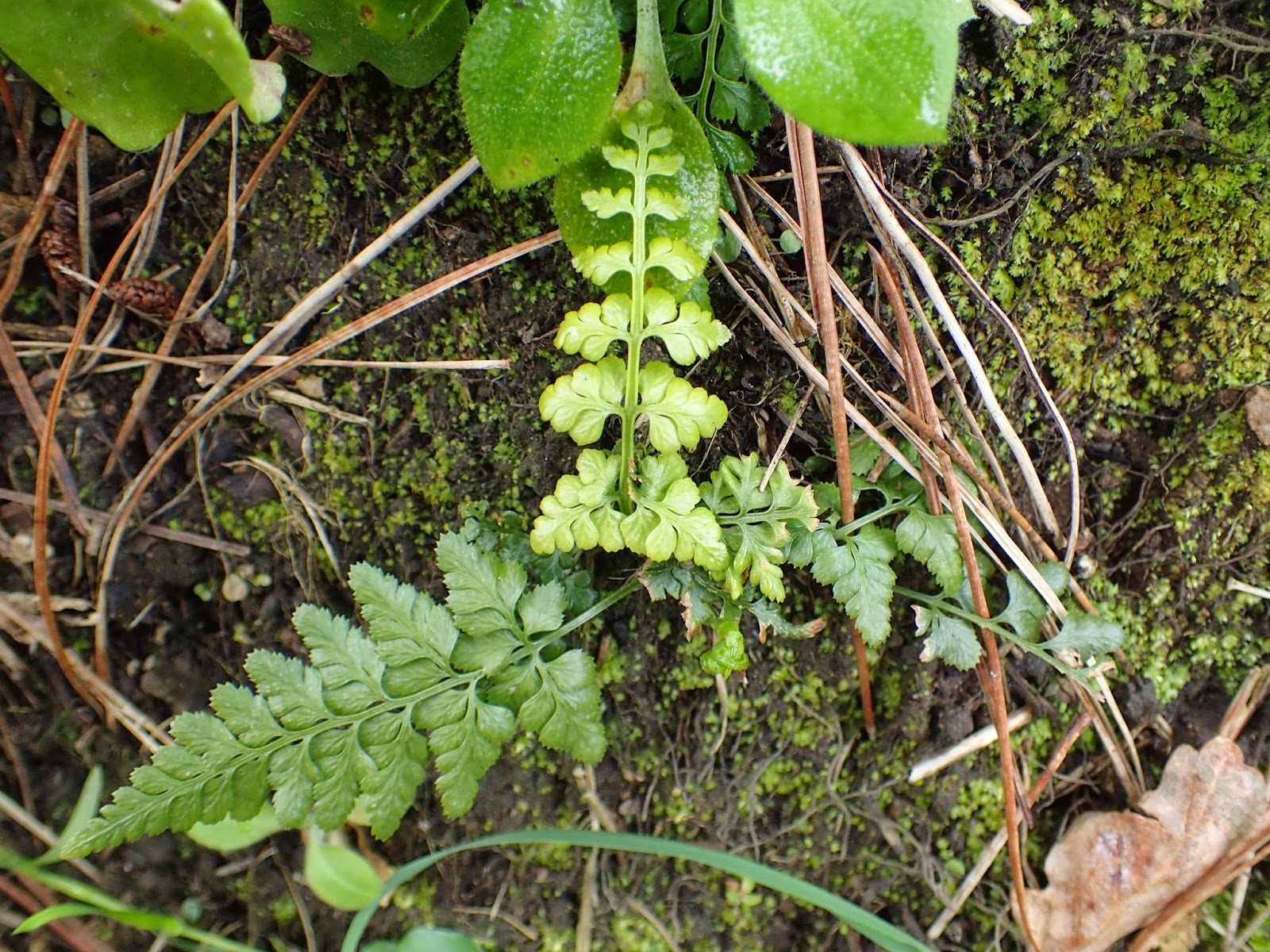 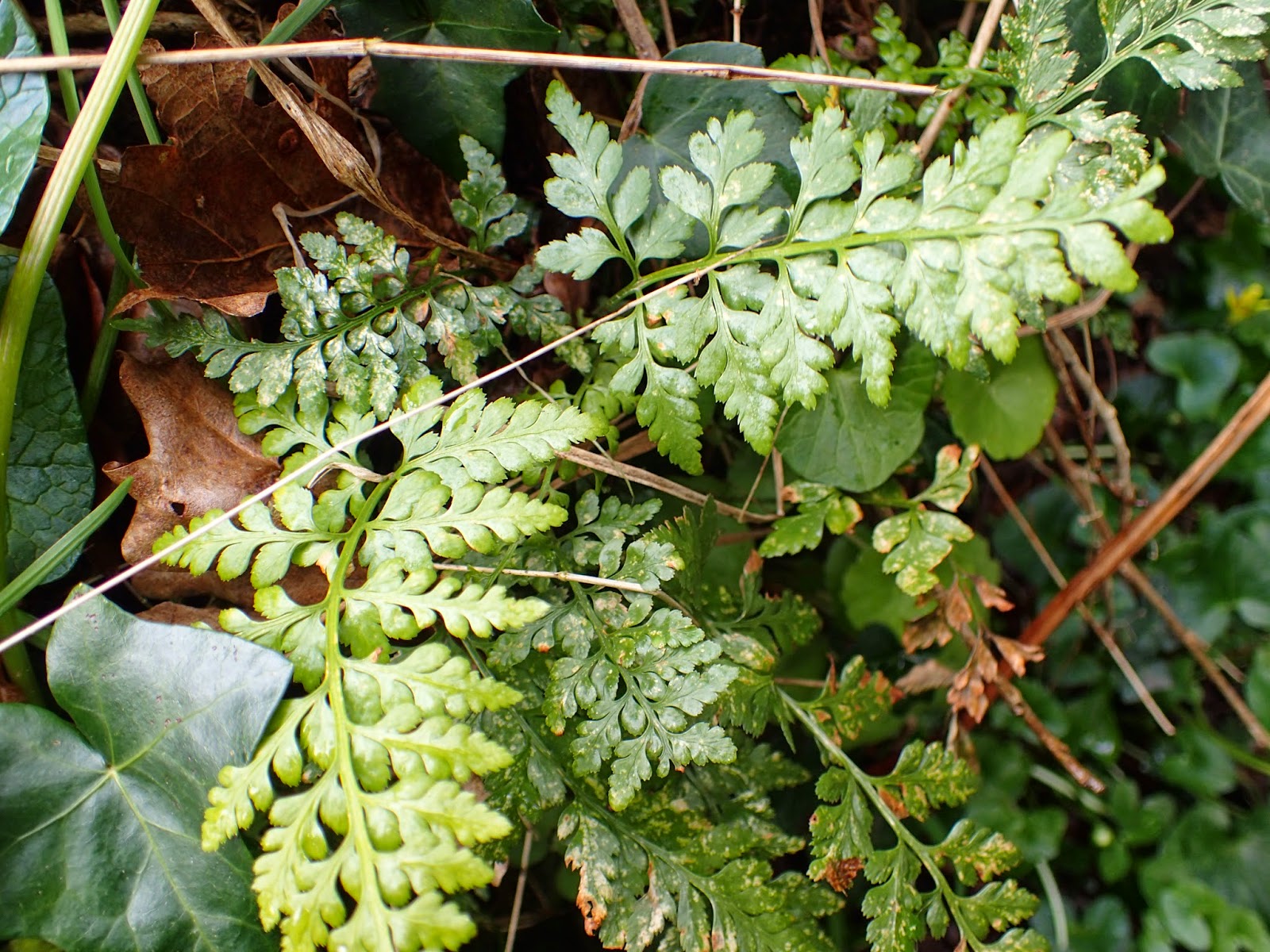 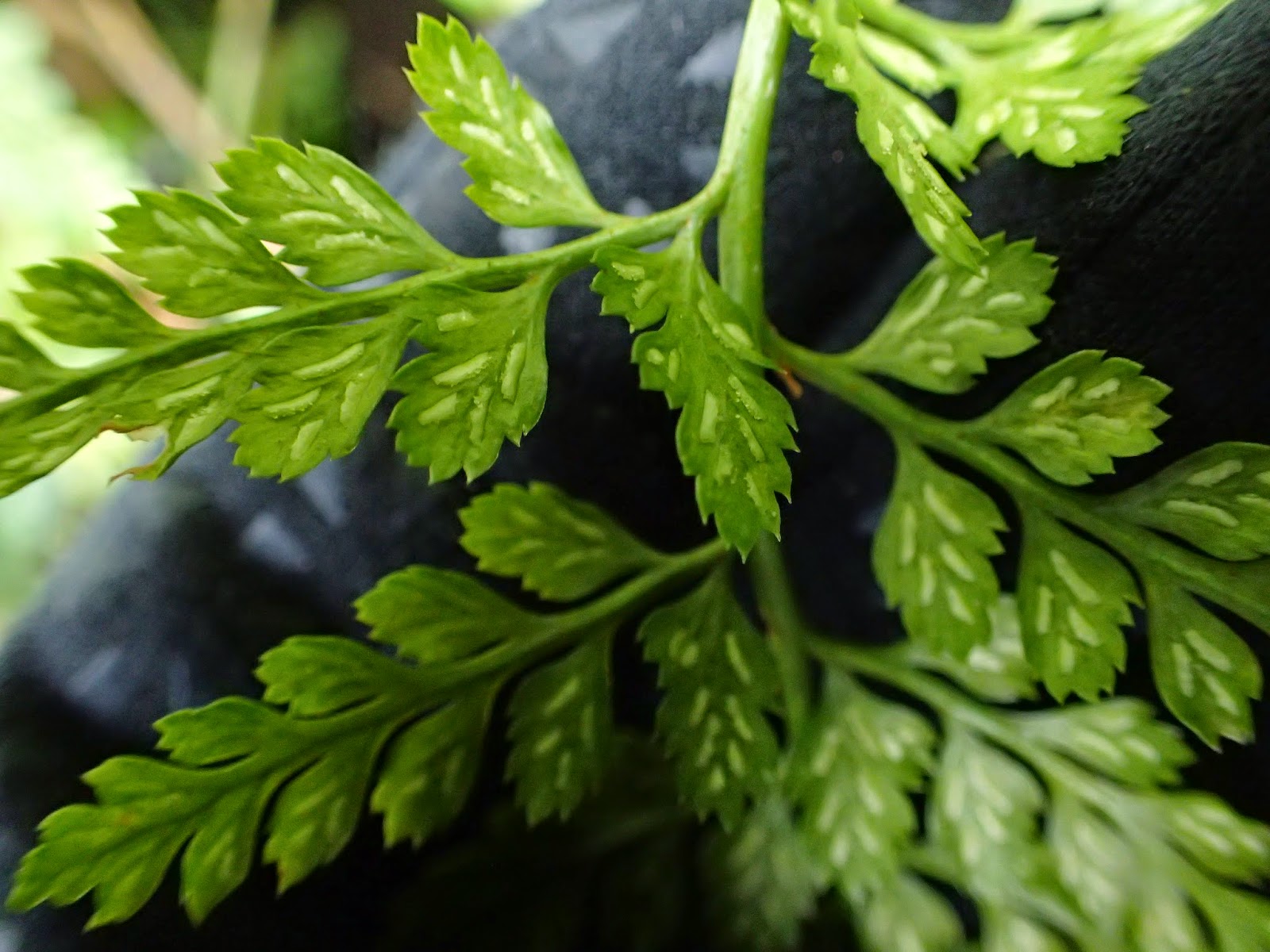 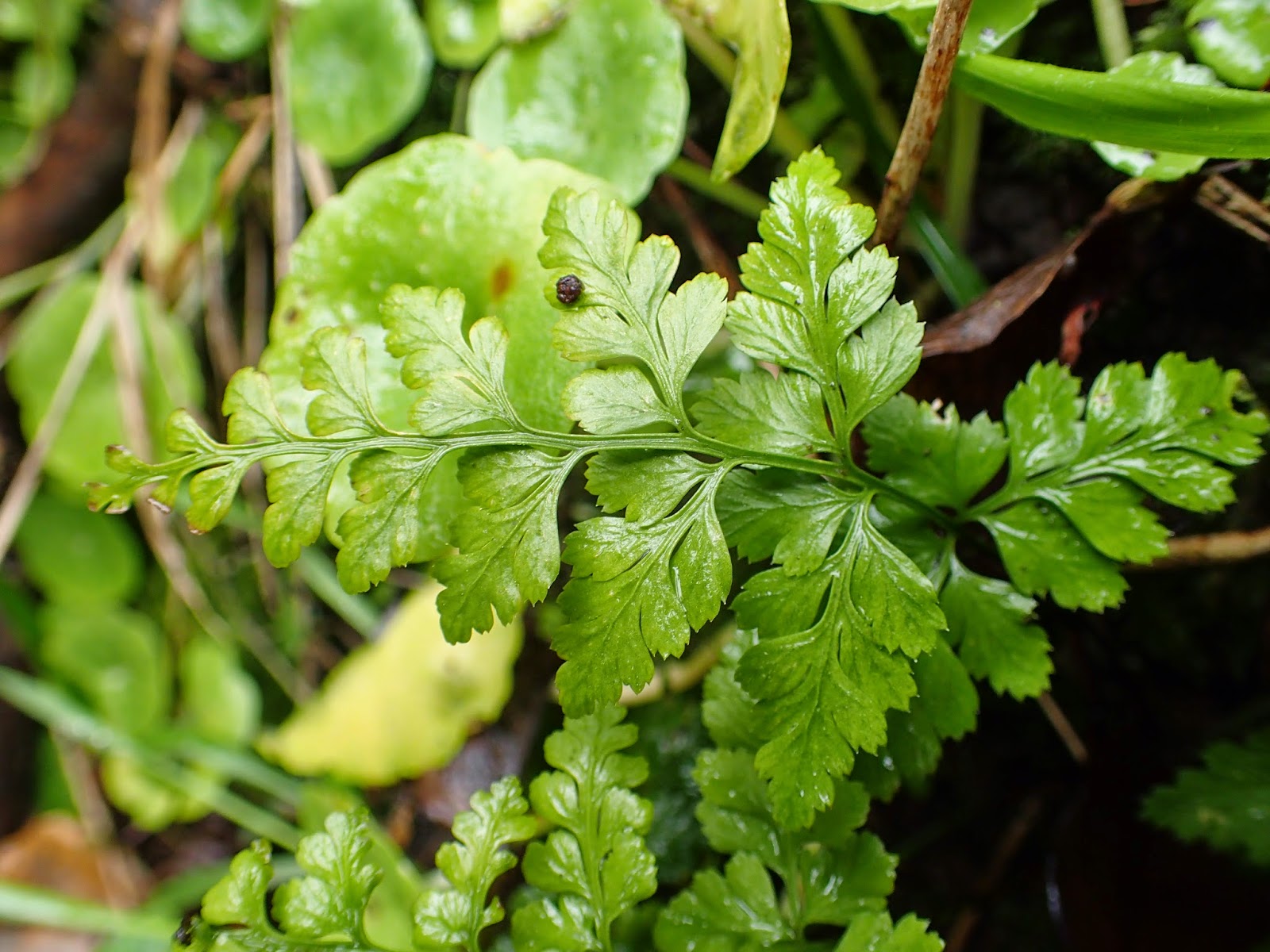 So you think it's a hybrid? It generally is if most of the above are present but to make sure it's not just an unusual. A. adiantum-nigrum (always a possibility!) then the spores should be checked under a microscope to see if they are sterile. This is easier said than done if you are unclear what you are even supposed to be looking for! Hopefully these pictures should give an idea of what you may expect to observe.
The spore is well formed being circular to slightly oval shaped. It is also quite consistent in size.
In contrast to the spore of the parent species, this spore is sterile. A result of this is the inconsistency in shape and size of the spore as seen in the picture.

Now, let's move on to the other two hybrids!

This is the hybrid between Asplenium scolopendrium and Asplenium obovatum subsp. lanceolatum. Identification is relatively straightforward as they are so distinctive so photographs will do more justice than a description. 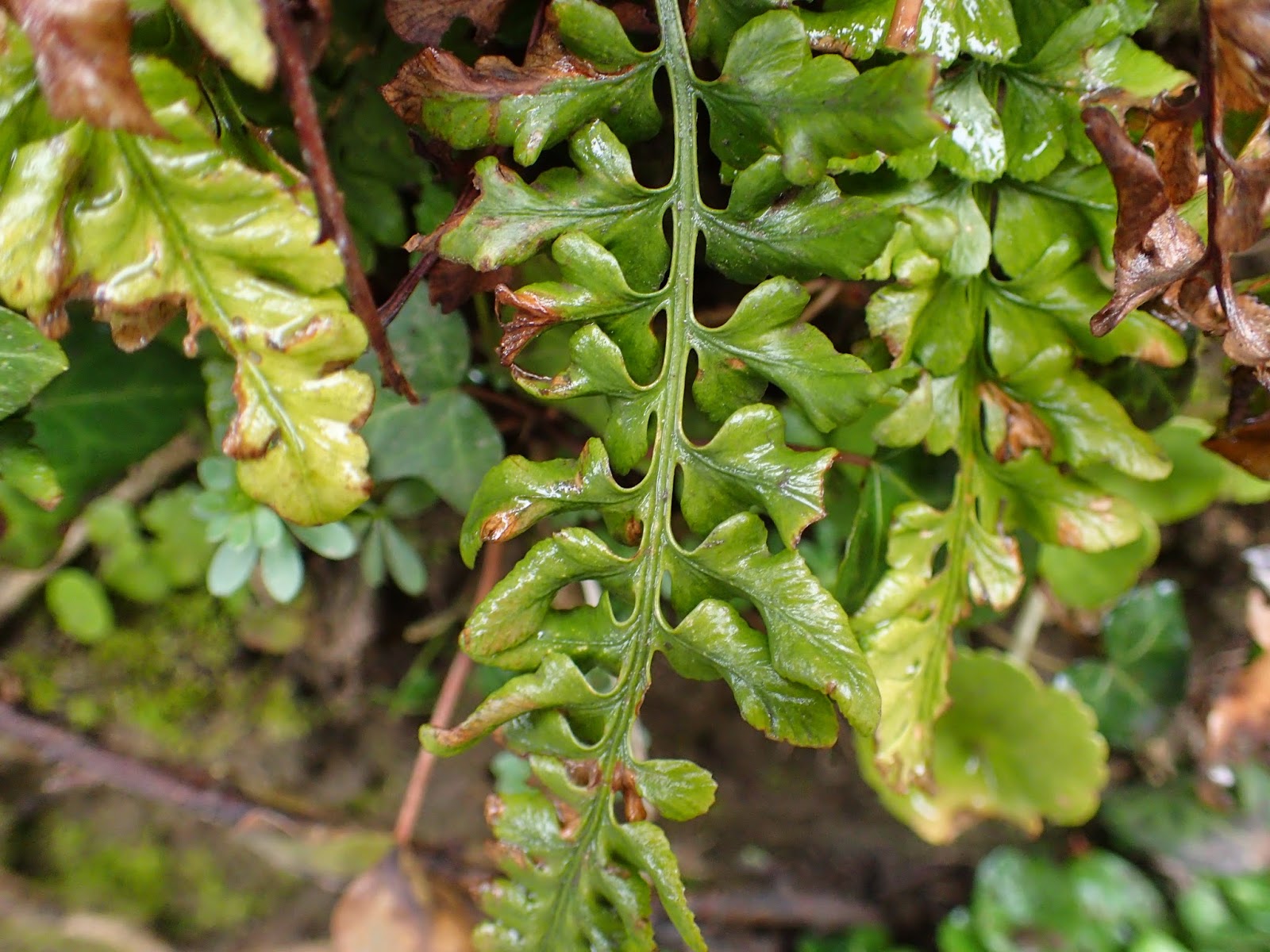 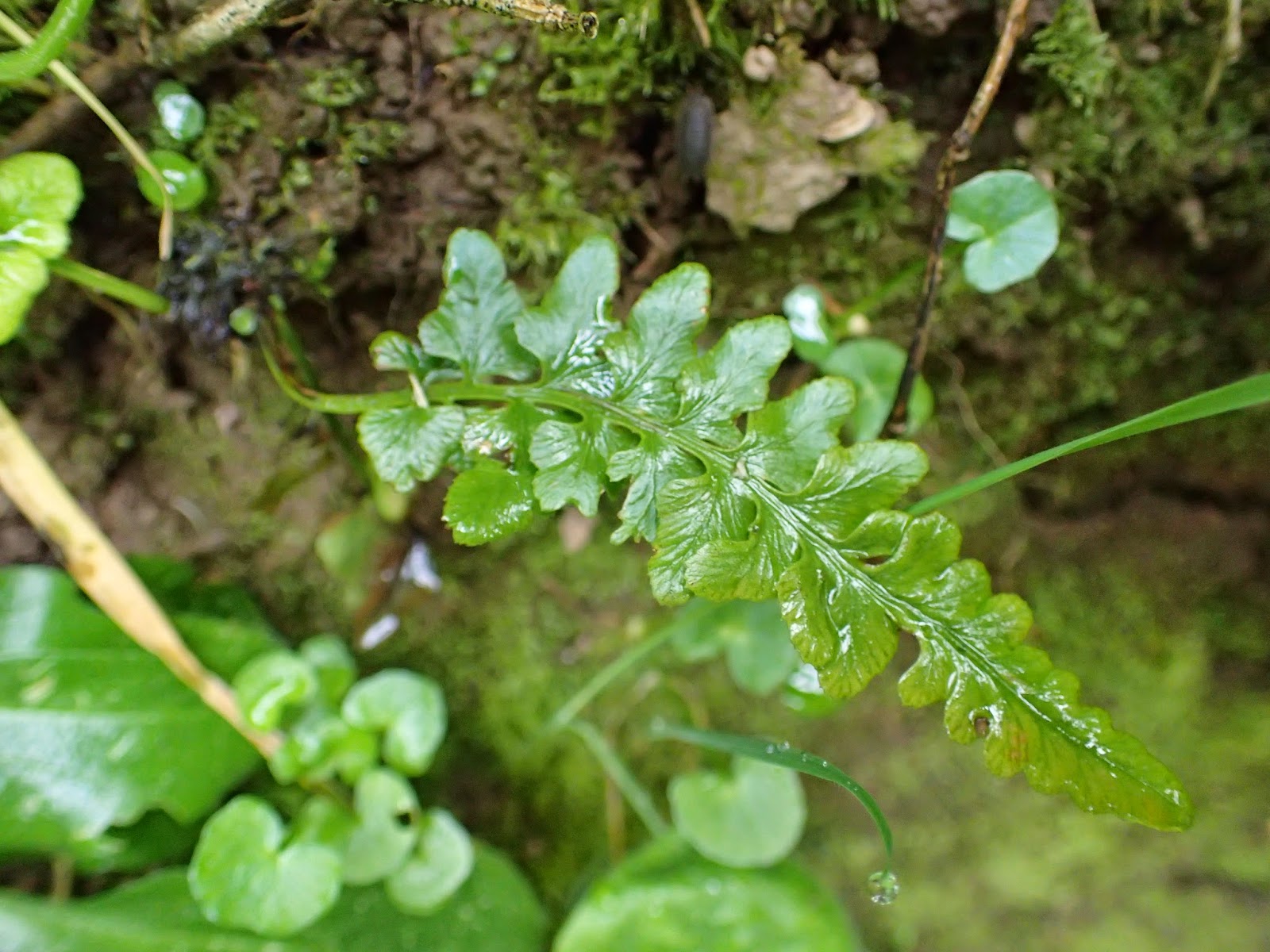 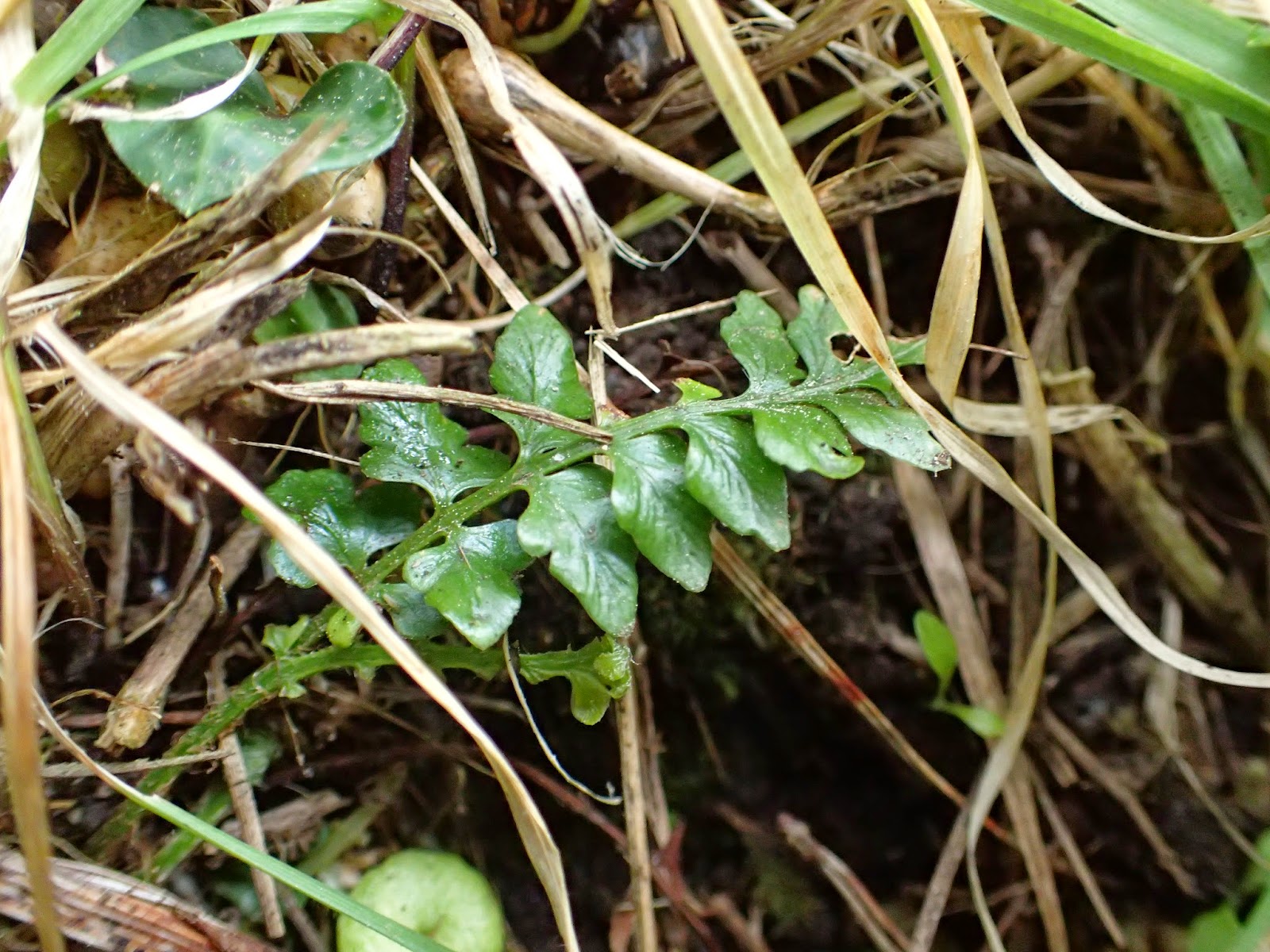 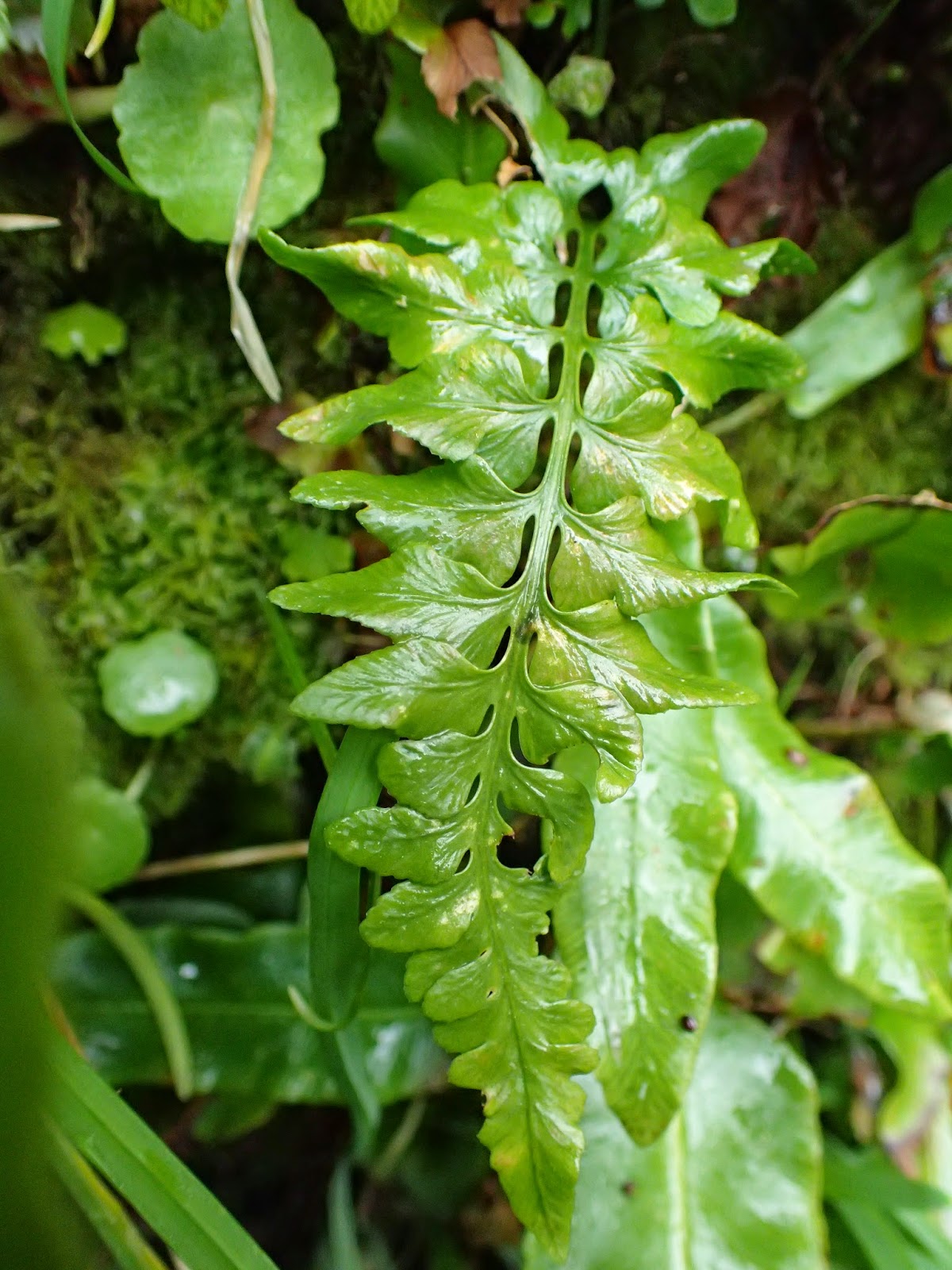 Finally, Asplenium x jacksonii... This is the hybrid between Asplenium scolopendrium and Asplenium adiantum-nigrum. It is very rare and I have only seen herbarium specimens of it, despite many hours searching! It is similar in appearance to the A x microdon but it is much stockier and more triangular in shape.

If you would like to learn more about ferns, I would recommend membership of the BSBI (http://www.bsbi.org.uk/about_bsbi.html) and the BPS (http://ebps.org.uk/). Both are excellent organisations for beginners and more experienced botanists alike.

I'd like to thank BPS for arranging such an enjoyable field visit, it was great to be able to 'talk ferns' with like minded enthusiasts on my home patch!
Posted by Unknown at 13:32 No comments:

This weekend the British Pteridological Society held a vist to Guernsey to see some of the extraordinary cryptogams on the island, some of which are endemic (more on those later). To keep the post brief I will not go into depth on the less unusual species seen by the group, however I will list them at the end along with their distribution. 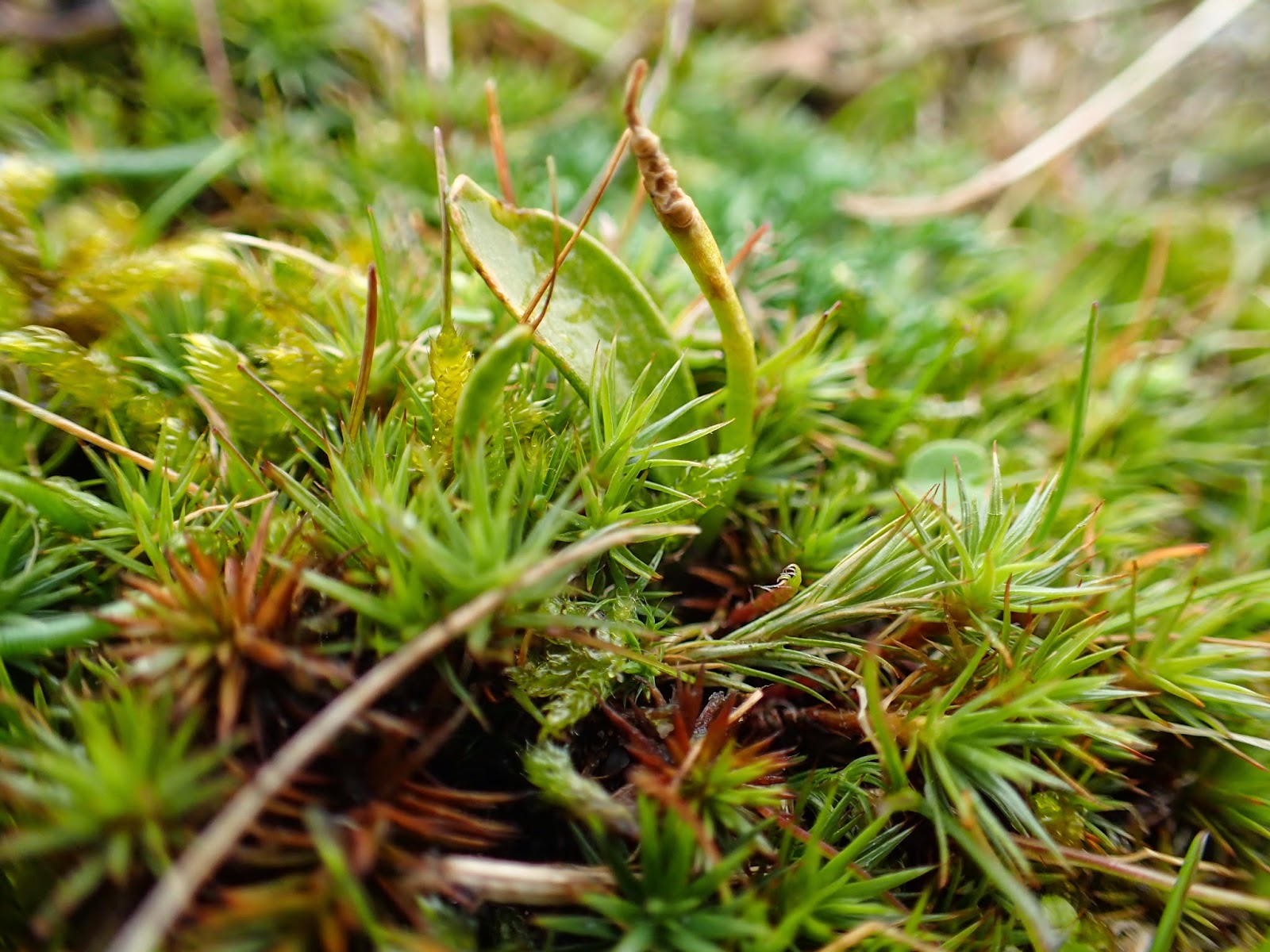 This is an exceptionally rare fern in the British Isles and quite rare throughout its entire native range. The Guernsey locality at Fort Hommet is a patch around 2x2m. The plant grows amongst moss on thin, peaty and sandy soil. Although exposed to strong winds, the site is protected by a large boulder on the north side and recieves warmth due to its south facing exposure. The plant itself is not particularly conspicious with the sterile fronds measuring 1cm or less in length, underwhelmed is most people's first feeling on seeing it! This year has not been particularly good for seeing fertile fronds, with just one fertile plant in the entire colony. The result of of poor weather and grazing from rabbits. 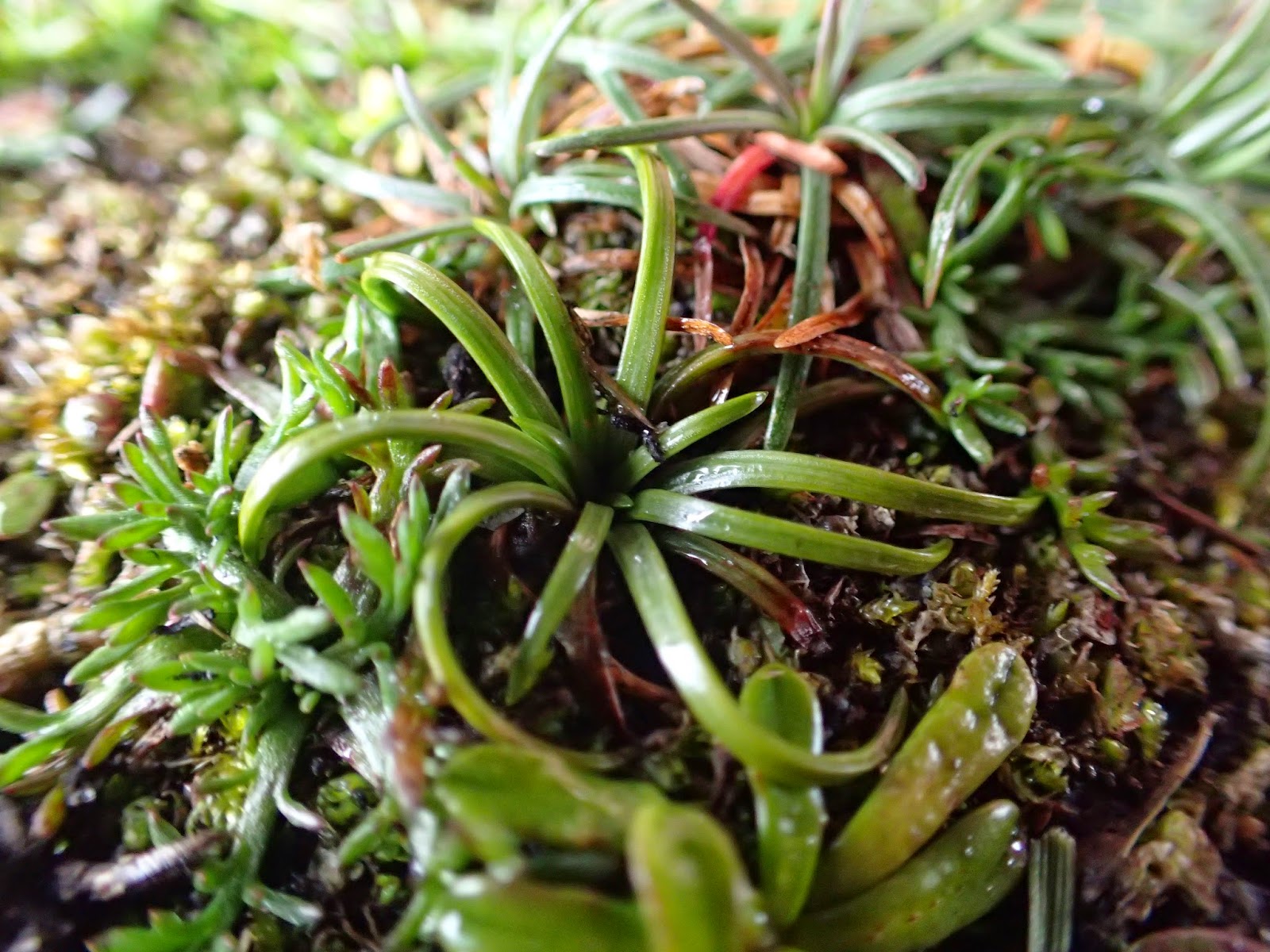 Another Guernsey rarity, also growing at Fort Hommet. This is the only native land dwelling quillwort species and it seems to be quite picky in terms of habitat; generally found growing around coastal turf in bare peaty soil which is often seasonally flooded.
At first, identification seems like a daunting task as Isoetes histrix tends to grow in the same habitat as all of its angiosperm dopplgangers! Scilla autumnalis can be dismissed immediately as it is far less foliaceous and the few leaves it does have are long and strappy in contrast to the numerous short leaves of Isoetes. Other possible confusion can be avoided by observing the distinctive white lines of stomata down each side of the leaf in Isoetes; this feature being absent in all other possible sources of confusion. 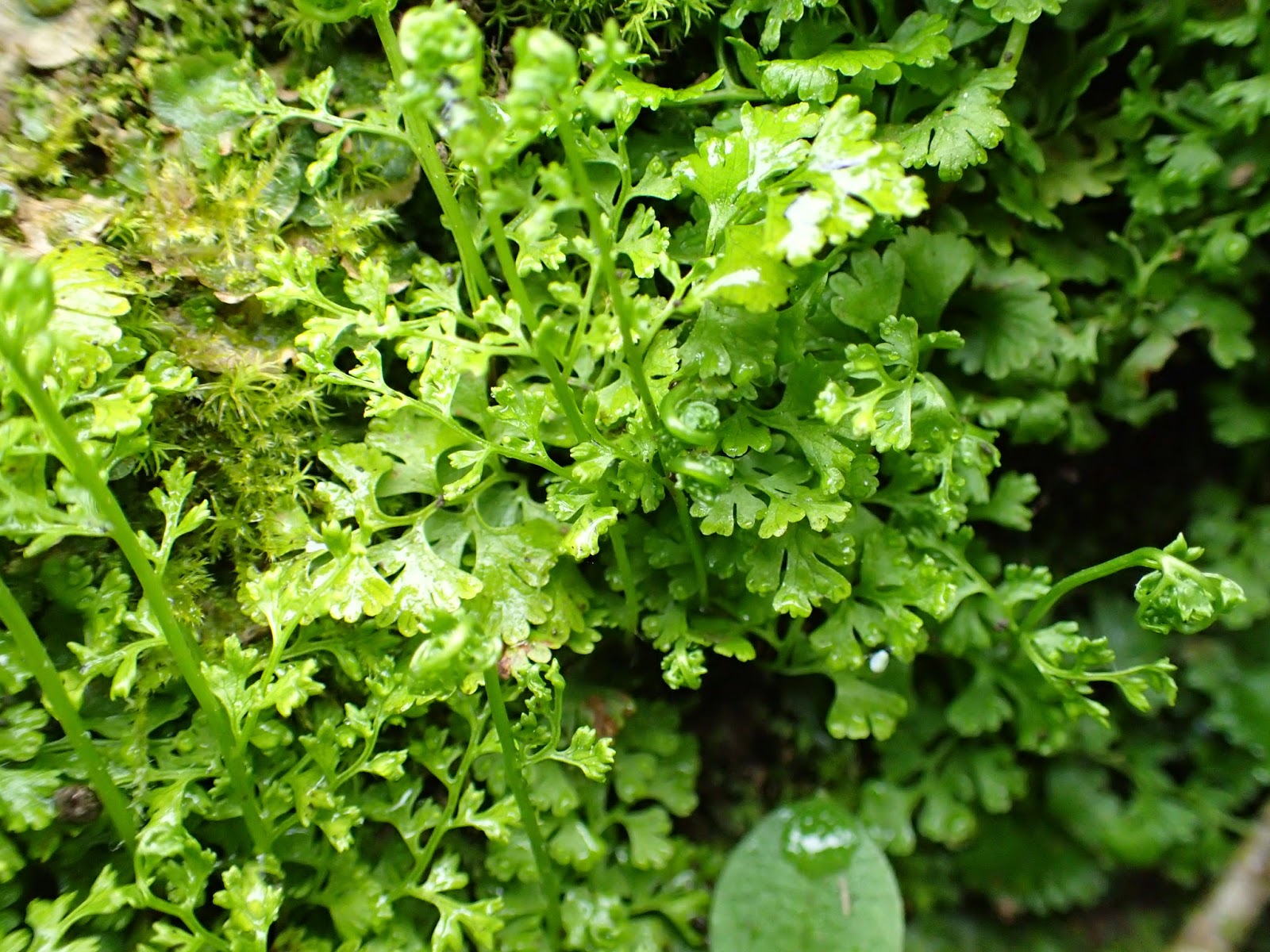 This is a very special species as it is the one of the only ferns with an annual sporophyte stage. It is exceptionally rare in the British Isles, the Channel Islands being the only locality. In Guernsey this species is found in just one hedgebank where it proliferates in disturbed patches.  The fronds are small at around 2-3cm, the individual plants can form sizeable clumps however and this year it seemed to be doing especially well due to favourable climatic conditions. Typically the sporophyte stage lasts from around November to May but climate does influence this.